The deepest values of early American evangelicals, revealed in what Methodists said about their dead; part III

Continued from “The deepest values of early American evangelicals, revealed in what Methodists said about their dead; part II“

The highest virtues:  “the courage of one’s 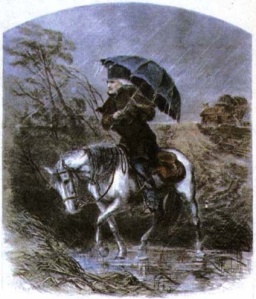 convictions” and the boldness to speak them

Along with this manly work-ethic, Methodist memorialists of the 19th century seem most to admire the traits of unshakeable conviction and bold speech.  In fact, the phrase “the courage of his convictions” is liberally laid on throughout the 19th century.   As early as 1793, Benjamin Carter, an ex-soldier, was noted as “a pointed, zealous preacher, and a strict disciplinarian,” who “appeared not to fear the face of any.”  Ninety years later, in 1884, the eulogist of Tennessee’s Robertson Fagan wrote, “He was of ardent temperament, indomitable will, and commanding faith,” “not a man of half measures,” whose “power over men seemed to be almost magical.”

The writer of James A. Neely’s memorial put this trait of bold conviction in particularly vivid terms:

He had strong convictions of right and duty, and the courage of his convictions.  Of course this sometimes produced friction, but it was that friction that any man will generate who dares to do the right and defend the right.

Brother Neely was not a man who, like a fluid, assumed the shape of his surroundings.  He was a strong preacher of the truths of Christianity and a defender of the faith once delivered to the saints.  But such were his life and the manifest integrity of his purpose that honest men who differed the most widely from him and with whom he had the most friction gave him credit for sincerity and respected his boldness in standing upon his principles. (Memorial Sketches… [1870-1912], 38-9)

Of Rev. Thomas Gaines Slaughter, formerly a soldier in the Civil War, but wounded, converted, and ordained as a preacher in the Methodist church, the writer says:  “He possessed the courage of his convictions.  He rebuked sin in a bold and fearless manner, yet in tones so tender and pathetic as to make the sinner love him.  Candor and sincerity were dominant elements in his character. . . . He was very pronounced in his purposes, positive in his utterances, and dared always to stand by his convictions.” (Memorial Sketches… [1870-1912], 57)

Of the Rev. Rufus W. Coons it is written:  “he was true to his convictions, true to himself, and true to the people to whom he preached, neither fearing their frowns nor courting their smiles, but faithfully warning them when he saw them in danger.” (Memorial Sketches… [1870-1912], 61)

John W. Christian was portrayed as having “the profoundest convictions of the truth of the gospel. . . . He believed and therefore spoke.  Hence he was fearless in denouncing error and faithful in defending the truth.  If men approved, well; if not, he was at peace with himself and his Master, and none of these things moved him.” (Memorial Sketches… [1870-1912], 90)

Similarly, Rev. William Clark M’Coy, D.D.:  “Blessed with a strong body and an unconquerable will, he was not easily turned aside from whatever he undertook by ordinary obstacles.”  He was characterized by “a holy ambition to do and [sic] die for his Lord.” (Memorial Sketches… [1870-1912], 44)  By the way, the doctorate of this and other ministers was bestowed honorarily—in M’Coy’s case, by Emory College.

In summary, these Methodist preachers were portrayed in many respects as “men’s men”—unflagging in their performance of duty, bold to speak out, slow to complain, and again, most of all, unflinching in their convictions.  So for example Rev. John Baxter Stevenson:

Brother Stevenson was a solid man.  Perhaps no other word is so expressive of the man in every sense—a clear head, sound judgment, unimpeachable piety, indomitable energy, a strong will, ardent convictions of duty, with an unflinching courage of those convictions. (Memorial Sketches… [1870-1912], 81)

Macho wasn’t everything, however.  Usually appended to these more active, forceful virtues were gentler ones—those connected with a deep and evident spirituality.  One of these was humility.

The Rev. Daniel Duncan was judged to have been striking in appearance, but “without the appearance of haughtiness.  No man ever looked into a meeker, kindlier face than that of Daniel Duncan.”  The forbidding daguerrotype which accompanies the piece belies this description.  However, the writer insists, “A little child could read his spirit of kindliness in his very look.  He was unsuspecting in his estimate of human character.  He believed in his fellow men and trusted them, sometimes to his own hurt.”  Note that this ingenuousness might in fact have been considered by Methodists at least of an earlier age, such as Peter Cartwright, as something of a defect.  “He was always ready to make excuses for the misdeeds of men.”  Hastily, however, the portraitist adds:  “He gloried in the work of redeeming men from sin and error. . . .” and so forth. (Memorial Sketches… [1870-1912], 32-3)

Certainly humility was an almost standard virtue to invoke, as an inoculation against the grand, almost superhuman virtues the eulogist was about to impart to his subject.  Typical were the words of the obituary-writer for Rev. Hardie Brown, D.D.:

Such was his modesty as to personal notoriety that if he were standing by our side as we write he would likely say:  “Brother, I am not worthy.  Please do not write great things of me.”  Humility was one of his peculiar characteristics. Memorial Sketches… [1870-1912], 47)

However, the admiration of Methodists for this trait does not seem to have been insincere.  And at the source of this humility, and valued even more, was a trait which I would simply call spirituality.  So in the case of the same Brother Brown, it was written:  “He ever felt that he was in the immediate presence of the supreme God; hence he was humble in heart and in life, and it constituted his beauty and his strength.” (Memorial Sketches… [1870-1912], 49)

His eulogist then elaborates on Brown’s spirituality:

Dr. Brown was a man of deep earnest piety who enjoyed conscious communion with God and carried with him the influence of the Spirit.  This inward experience of grace gave him access to the hearts of the rich and the poor, rendered him attractive in the pulpit, clothed his utterances with beauty and power, and was the motive force within him that sent him as a messenger of mercy to the homes of the poor in Birmingham. (Memorial Sketches… [1870-1912], 50)

Sometimes the two kinds of virtue—the stronger and the gentler—were blended in a sort of androgynous mix, which was nonetheless considered eminently manly.  Such was the description of John W. Christian:  “As a man Brother Christian possessed all those virtues that enter into the character of true manhood. In him were blended the tenderness and affection of a woman and the courage and fortitude of the hero.” (Memorial Sketches… [1870-1912], 91, my emphasis).

Continued in “The deepest values of early American evangelicals, revealed in what Methodists said about their dead; part IV, conclusion.”