Christian History magazine issue #101, on the history of hospitals, is here–and there’s much, much more to come 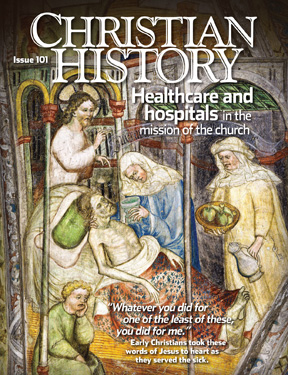 Yep. The Christian History editorial team is celebrating the printing of Issue #101: Healthcare and Hospitals in the Mission of the Church. For full access to this full-color issue (including a magnified view for us old people–just click on the magazine to enlarge), see here.

The issue tells the fascinating story of how early and medieval Christians pioneered the healthcare institutions on which we now rely, including the modern hospital.

Christian History itself is moving forward in full and glorious health. Projects in the pipeline for 2011-12 include the following:

–a guided tour of 1,000 years of worship from Constantine to Luther,

–a larger issue or even book on the history of Christianity in America,

–an issue showing how influential early African Christianity (especially North African) was in the development of the faith,

–an issue exploring the ways the church responded to the travails and malaises of industrial society from the early 1800s through the beginning World War II, and

–a special keepsake issue on the history of Christmas.

If you haven’t signed up for the magazine yet at http://www.christianhistorymagazine.org, now is the time! Tell your friends!

2 responses to “Christian History magazine issue #101, on the history of hospitals, is here–and there’s much, much more to come”