Faith VS. reason: A too-convenient modern story about medieval monks vs. scholars 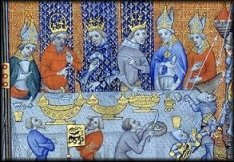 Council of Sens, 1140, at which Bernard of Clairvaux had Peter Abelard’s doctrine condemned

One more snippet on theology from  my forthcoming Getting Medieval with C S Lewis. Here’s a cardinal truth about reading history: just because you hear a story again and again doesn’t mean it’s true. In fact, it may indicate that a legend has taken on the aura of truth and is no longer being examined. That’s something like what I think has happened in the common “monasticism vs scholasticism” narrative you will often see in textbooks and hear in classrooms:

Now there is a modern scholarly narrative about scholasticism that you may have run across – it still seems quite popular. That narrative takes the politicized struggle between two strong personalities—Bernard of Clairvaux and Peter Abelard—and derives from it a thesis about the relationship between monastic and scholastic thinking: that the world of medieval theology was divided into obscurantist, fideist monastics who were afraid of using reason and dialectic and wanted to protect mystery, and intelligent, rational scholastics who didn’t care which sacred cows they slaughtered en route to a more “systematic” theology. In this story, Bernard of Clairvaux leads the charge against logic as the arch-monastic, and Abelard stands as the champion of logic and systematization.

There is not space here to make a full case against this portrayal, and in any case it is beyond my competence, but it seems to rest on shaky foundations from the get-go: When you read a scholar who really knows Abelard well (e.g. David N. Bell[1]) or who really knows Bernard well (e.g. John Sommerfeldt[2]), you discover that Abelard wanted very much to preserve the central mysteries of the faith—though at times he used injudicious language to do so[3]—and that Bernard was a master dialectician who preserved a place for the Christian life of the mind.

One more suspicious aspect of this “scholastics vs monastics narrative” is how neatly it reflects certain modern realities and concerns: First, it fits nicely into the centuries-long tension between academics and religious functionaries that still conditions the dialogue between faith and reason in many American universities,[4] which resulted in the nearly unbroken modern sway of Andrew Dickson White’s now-discredited turn-of-the-century thesis about the essential conflict in history between science and theology. Second, it works well with the tension between the world of “academic theology,” abstracted from the church, whose concern to appear modern and scientific issued in a de-supernaturalized “liberal” version of theology, and the conservative, especially “evangelical” body of church folk who therefore inherently suspect any imposition of reason on matters of faith as alien and hostile (so the common evangelical saying about those who have gone off to “cemetery” to learn theology). How convenient to have a story about medieval theology that so nicely illustrates and confirms these modern situations in university and church.

What I find more representative of medieval thinking is not a division between reason and faith, which was certainly present at spots but was more a set of sporadic skirmishes around the edges, but the grand synthesis of, for example, Aquinas. The latter recognizes the tensile strength of the Christian faith handed down from the early fathers. The tradition is strong because it hands down, not an unreasonable faith, but a faith that at certain points carries us beyond reason: so you can reasonably prove the existence of God, but you can also preserve the final mystery of things that are unexplainable in human terms: a Savior who is both God and man, a God who dies, and so forth. Aquinas erects on this bedrock commitment a dazzling scientific and philosophical edifice of theology, and he does so (by the way) as a Dominican friar, from within a deeply devotional and monastic culture, not as a dried-out academic.

[2] Sommerfeldt, Bernard of Clairvaux On the Life of the Mind.

[3] DATUM: Abelard’s most famous book, Sic et Non, simply laid out the contradictions between key theologians on a range of issues, and said “Start the conversation.” He did not resolve each – and certainly did not do so in a heretical direction, as the “logic-choppers” of the early church had once done.

[4] George Marsden, The Soul of the American University: From Protestant Establishment to Established Nonbelief.

4 responses to “Faith VS. reason: A too-convenient modern story about medieval monks vs. scholars”