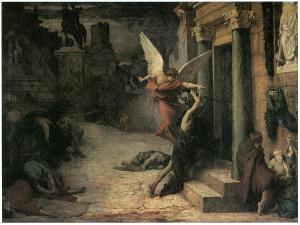 The plague in Rome. Painting by Jules Elie Delaunay

Moving on in the “hospitals chapter” in my Getting Medieval with C S Lewis:

What does a distinctively Christian practice of mercy look like?

To see what a distinctively gospel-centered approach to care for the body looked like in the early and medieval church, we turn to a case study: the early development and medieval rise of the hospital

What, then, did this distinctively Christian practice of mercy look like in the early and medieval church? A key case is that of the hospital. Before Christianity, there were no hospitals in the Roman Empire. Within a few centuries of Christ’s coming, an institution that would later develop into the hospital begin to emerge as a unique new form of religious philanthropy on the face of the earth.

Before it did, however, there was plenty of Christian healing and helping going on—with healthcare usually happening in the context of needy members: widows, orphans, the poor. But it was happening in the church. Specifically, it was happening within parish networks. As a regular part of their worship, the earliest Christians gathered alms to be distributed by deacons for the help of those in need. By the mid 200s, the benevolence mission of the church had birthed a complex of minor clerical orders, and a report from Cornelius, bishop of Rome, in 251 described a strategic system that involved dividing the city into seven districts, with deacons and subdeacons appointed to care for the people in each one. Gary Ferngren relates that the Roman church in that day spent up to a million sesterces a year—a huge amount of money—in supporting and caring for 1,500 needy people.

While this benevolence work included much more than healing, healing was an increasingly large part of it, emerging out of the larger concern for the poor. Christian medical philanthropy and the Christian institution of the hospital always centered around caring for the poor, as those especially vulnerable to the misery and death brought on by illness. “Church leaders encouraged all Christians to visit the sick and help the poor, and each congregation also established an organized ministry of mercy.”[1]

While at first ad hoc and congregational, something soon triggered more concerted efforts and greater organization. That something was plague, which was not just a medieval but also an ancient phenomenon. The 15-20 year epidemic that spread across the empire from North Africa starting in 250 A.D. devastated many areas of the west. At its height, 5,000 died in one day in Rome.

Now, this was still pre-Christian Rome, and the authorities launched no organized effort to “prevent the spread of the disease, treat the sick, or even bury the dead.” In fact, when the plague hit Carthage in North Africa, the Romans, in the attempt to appease their Gods, turned an accusing eye on the Christians, sparking the cruel empire-wide persecution under Emperor Decius. Bishop Cyprian of that city, however, urged the Christians not to return evil for evil, but rather to bring aid to all who were suffering, believer or Pagan—a first.

Also a first was the level of organization required to pull off the relief effort. For example, in this and subsequent plagues, Christian “ambulance corps” went where the Pagans would not—to the houses of the sick—in the process endangering their own lives.

How successful were such efforts? While the level of medical knowledge at the time was rudimentary, basic nursing care alone (as we now know) can reduce mortality in an epidemic by as much as 60 to 70 percent. This success did not go unnoticed, and as Rodney Stark has argued, may help account for the tremendous growth of the Christian church in those early years, as people saw the real physical, as well as spiritual, benefits of joining the Christian community.

In the early 300s, we see the next step: lay orders in such cities as Alexandria and Antioch, dedicated to caring for the many sick homeless people literally dying in the streets. These groups would “distribute food and money to them and take them to the public baths, where their basic hygienic needs could be met and they could find warmth in winter.”[2]