The wisdom of Benedict: God in all, and Christ in the other 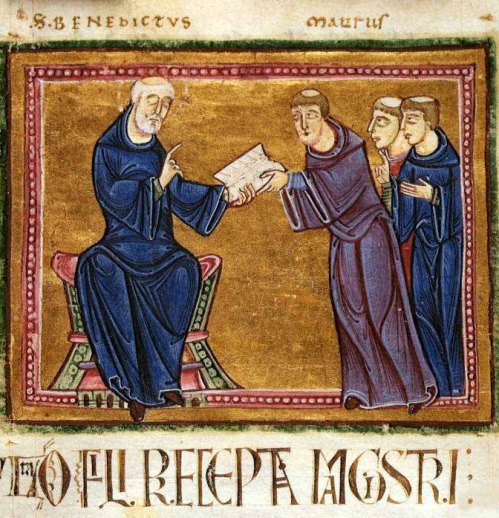 Benedict delivering his rule to the monks of his order

At this point in the draft of Medieval Wisdom: An Exploration with C S Lewis, I move from general remarks about monasticism to a reflection on the specifically Benedictine form that has long dominated Western monasticism. This is a distillation of the wonderful work of Benedictine scholar Columba Stewart:

We need something like monasticism because community is necessary for growth

The overwhelmingly dominant form of coenobitic monasticism in the West after the 9th century was the Benedictine form. When we talk about Benedict of Nursia’s (480 – 534/7) Rule, my students are conflicted. He insists on rules and disciplines, actual obedience, humility – all those things we free, democratic, individualistic Americans find so difficult. Benedict structures his monastic rule in a communal way that builds on the relational wisdom of Antony, but feels constricting to us. “For Benedict, as for the whole tradition before him, the key to monastic life was accountability to God and to other people.”[1]

Why is he so insistent on a lifelong community commitment?

First, because we hear God through each other – and this requires not just attentiveness but obedience

Benedictine scholar Columba Stewart identifies two fundamental insights in the Rule: First, “the divine presence is everywhere,” and second, “Christ is to be met in other people.” I’d call these the sacramental and the communal principles.[2] “The best kind of self-awareness,” says Stewart, “the kind leading to deeper and deeper awareness of God, occurs in the company of others. For most people, to become truly individual before God requires immersion in the common life.”[3]

Obedience requires listening. In fact, “the Latin word behind ‘obedience’ means ‘listening.’” And while “the fundamental conversation is that between each human person and God,” in which “the word is spoken through the Bible and in prayer,” monastic life expands that conversation. It is “based on the Christian recognition that God’s word to each of us can be mediated in human relationships as well, provided that they are grounded in attentive listening and prayer.”[4]

Though Benedict’s words on obedience may seem at times harsh and oppressive, in fact everyone, including the abbot, must be obedient. “All alike stand before God and under the authority of the Rule.”[5] In chapter 72, on “Good Zeal,” “obedience becomes fully mutual as the members of the community act with ‘most fervent love,’ vying to show their respect for one another, to bear one another’s weaknesses of mind and body, to be obedient to one another, to prefer to benefit others rather than oneself.” The whole Rule, says Stewart, is epitomized in the chapter’s final words: ‘let them offer the love of brother or sister selflessly to one another. Let them fear God lovingly, love their superior with sincere and humble love, prefer nothing whatsoever to Christ: and may he bring us together to everlasting life’ (RB 72.8-12).”[6]

Moreover, Benedict’s teaching on obedience is thoroughly couched in language from and about Christ. “Five of the six scriptural quotations in Benedict’s chapter ‘On Obedience’ (RB 5) are from the New Testament. The most important of them is John 6:38, which recurs in the chapter ‘On Humility’: ‘I have come not to do my own will, but the will of him who sent me’ (RB 5.13, 7.32). By living in a monastery under a spiritual mother or father, Benedict claims, [monastics] imitate that obedience of Christ. . . . The disciple, like Christ, lays aside . . . self in order to be totally open to the word offered (RB 5.4,7,15).”

To do obedience well, of course, “love must be the driving force, the kind of love that ‘holds Christ more precious than all else (RB 5.2,10). Without love, obedience is impossible: Christ, after all,” says Stewart, “was a beloved son, not a masochist. Given such love, obedience becomes natural.”[7]

Second, because Christ is in each other

For Benedict, the incarnate presence of Christ is not limited to Jesus, but may be found in “the monastic superior, the sick, the guest, the poor”—really, just about everyone we meet. In practice, this took a particularly evocative form: when the monks processed into the church, two by two, for the daily worship service, they would stop at the altar and bow to each other – as to Christ.[8]

There was another, more pervasive way this awareness of Christ in the other took concrete shape: Benedict insisted, following Matt. 25:35-40, that “the sick are served as Christ, according to Christ’s own command.” As we saw in the “compassionate ministry” chapter, each patient in the monastic infirmary—be they monk or stranger—was to be “welcomed as Christ. . . . Humility is to be shown to guests in a bow or prostration.”[9]

For Benedict, this bowing to the stranger was not a mere formality. In his chapter on humility, which Stewart calls “the very heart of his spiritual theology,” he depicts the monk as “standing with head bowed in total acknowledgement of sinfulness, as if already before Christ in judgment (RB7.62-6).” This is a “picture of someone who no longer has anything to hide from the Lord.”[10]

So, Benedict had his monks give, as the first response to a guest who has come, not “can I help you?” but adoration of the Christ who has just arrived. And “Benedict has the superior and community sing this verse after washing the feet of the guests: ‘We have received, O God, your mercy in the midst of your temple’ (Ps. 48:9). On the basis of this recognition, the practical needs of food, rest, and lodging can then be addressed.”[11]

Third, we need to be obedient because it mortifies the will and keeps us humble

Obedience is important because it mortifies the will, which as Lewis points out is the crucial task at the heart of our spiritual discipline. The corresponding virtue here is humility, which Benedict, like Francis later, stresses as the central Christian virtue. His chapter on humility is the Rule’s longest, and Stewart notes, “in many ways its heart.” The language is certainly harsh, and could be misused by “those intent on oppression.” But at bottom, Benedict’s exhortations of humility “promise freedom from the burden of creating and maintaining a (false) public image.”[12] Wise words in our Facebook era!

2 responses to “The wisdom of Benedict: God in all, and Christ in the other”