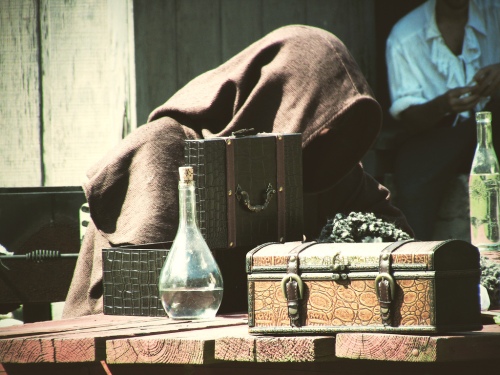 Well, after a job loss (last November) and a job search, since July of this year (2014) I am Director of Opus: The Art of Work – an institute at Wheaton College, Wheaton IL, dedicated to understanding God’s call for our work in the world.

All of this has delayed my forthcoming Baker Academic book, Getting Medieval: An Exploration with C S Lewis. But at last, the manuscript is in (yes, that’s me in the photograph, working in appropriately medieval style) and the editorial wheels are turning. Look for the book early in 2016!

Last-minute editing included a complete overhaul of my introductory chapter. So I’ll be posting the revised introduction bit by bit over the next few days. It includes what I think is a significant argument (based in a scholarly analysis of American Christian history – my specialist field) about why many of today’s American Christians dismiss 1,000 years of Christian history as irrelevant or at best a long string of dismal negative examples of how not to be a Christian. And it includes a taster of the nourishing themes I’ve found in my own study of medieval faith.

So, here’s the first bit of the revised introduction:

My angle of approach

I grew up in a home where my father, a theology professor, read to my brothers and me the delightfully quasi-medieval stories of C S Lewis, J R R Tolkien, George MacDonald, and others.[1] These were influences in shaping not only my imagination but also the faith I would find as a young adult. From the moment Christianity became my heart language, I always searched its vocabulary and traditions for the angles of vision first opened to me in those early literary stirrings. Where I found these angles, they helped me move forward in my faith. Where I did not, I wondered why not.

Since then I’ve never lost my fascination with either those modern authors or the medieval world they loved. Of course, they sometimes romanticized that world. But they also, as we’ll see, took it quite seriously as a source of wisdom for living. During my doctoral program in American church history at Duke University, a group of friends formed an “Inklings group.” Together we read and discussed those same medieval-influenced authors—and we reached for the older Christian wisdom from which they drew.

After Duke, I took a job editing Christian History magazine at Christianity Today. While there I edited issues and wrote articles on Lewis and Tolkien, as well as G K Chesterton (author of two splendid biographies of important medieval Christians), Dorothy L Sayers (translator of Dante and medieval French literature), and others. At the same time, I was able to continue my exploration – begun in graduate school – of such medieval thinkers as Benedict of Nursia, Bernard of Clairvaux, and the scholastic precursors of the scientific revolution. In those years I began work on my first book, Patron Saints for Postmoderns,[2] in which I explored the medieval worlds and worldviews of Gregory the Great, Dante Alighieri, and Margery Kempe, among others. All of this began to prepare me to see in medieval faith some blessings along with the banes.

But at the same time, I was becoming more and more acutely aware of certain realities of the church today—especially its evangelical Protestant forms—that make it hard for us truly to receive “medieval wisdom.”

When in 2004, I flew from Chicagoland to Minnesota to interview for a church history position at Bethel Seminary, the interviewers asked what period my evangelical students would most need to hear about. I did not yet entirely know why, but I blurted “the medieval.”

I soon found ample evidence, both negative and positive, to back up that impulsive answer. In my first year at Bethel, the evangelical-authored textbook I had chosen to use with my classes proved embarrassingly incomplete and biased in its treatment of medieval faith. Even once I found better sources and began sharing the good as well as the bad and the ugly in my lectures on the period, some of my students seemed unable to surmount their preconceptions. Many ignored the warning attached to my standard essay question on what lessons the church today can learn from the medieval church (“Do not limit yourself to negative examples”). They listed only Protestant caricatures (the state ruled the church, money corrupted church and prevented it from helping the people, the Bible was taken away from the people, the monastics tried to recover true discipleship but failed to engage the culture, etc.). Slowly, though, as I learned better how to teach the period, some of them began to find rich resources in the disciplines of the monastics, the devotion of the mystics, the intellectual passion of the scholastics, and much more. Formerly suspicious of all things medieval, these students began to discover and value some of the wisdom this book points to.

Increasingly, though, I wondered about the hole in evangelical tellings of church history – the prominent omission of the story of medieval faith except as a cautionary tale. Why did evangelicals so often seem to assume that the church apostatized after it gained cultural influence in the time of Constantine (4th century) and returned to God only after the 16th-century Reformation (or perhaps even only after the evangelical revivals of the 18th century)? Why this dismissal of over a millennium of church history – more than half of the time between Christ and today?

[1] I remember also T H White and Lloyd Alexander – although those have not impacted my adult faith as have the first three mentioned here.