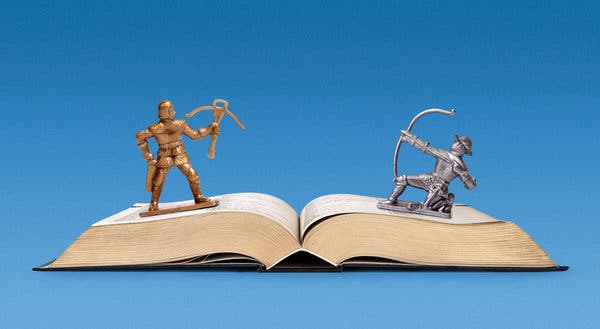 A little guide to Augustine’s thought on sin, freedom, and grace Following up on a previous post, this is something I cooked up while working as a “preceptor” at Duke–that is, leading seminars for students taking a course (in this case Dr. David Steinmetz’s CH13: Church History to the Reformation), in which we interacted in more depth with the primary documents.

This one’s on that Great Brain of the early church, Augustine of Hippo. It includes a few “notes to myself” about how to lead such a seminar, since as a doctoral student I was still wet behind the ears on this important matter of pedagogy. I wish I could remember which sourcebook we were using for the Augustine quotations. I could go try to figure it out from old syllabi, if anyone’s interested:

One of the first and most basic problems we have to deal with when we talk about this great North African theologian is this:  [write on board]  Is it AUG-us-teen or au-GUS-tin?  It makes no difference to me which we say, but somewhere along the way, I was told that if you want to make it at a party with a bunch of church historians, you need to use au-GUS-tin for this man from Hippo, and reserve AUG-us-teen for the archbishop installed in England by the Pope around the year 600, who tried to bring the Celtic [or is that SSSeltic?] church into line.

In any case, it doesn’t matter to me how we pronounce it today.  Saying AUG-us-teen won’t lower your grade…much.

Getting into Augustine’s thought:

2.  Start with the background from Latourette, to put Augustine in context with (1) the E/W distinctions S. has made, (2) some other “fathers,” (3) Augustine’s own personal history.

3.  Deal with quoted sections from Augustine, below, one by one, allowing conversation to develop as it will.  If this serves to jumpstart the process of “dealing with Augustine on freedom,” well and good.  I needn’t return to the quotations.  If things slow down, however, I can reopen with, “what about this statement: [quotation].  What is Augustine saying here and what do we think about it?”

4.  Throughout the process, resist going too far off into either what we think about Augustine (though that’s inevitable) or, especially, whether Wesley (Calvin, Luther, Joe Blow) would have agreed with Augustine.  It is OK to do this now and again, but as in a Bible study, let’s return to the text.  We need to discipline ourselves to do that because it is often so much easier to talk about our own opinions or those of our church traditions, than to confront and work through the thought of the person we are studying.

A little introduction to early Christian thought, for beginners

Icon representing the Council of Nicea

Back in the late 1990s, when I was a doctoral student at Duke, they used to give us PhD hopefuls “preceptorials.” That meant you helped a senior professor in their courses, as a teaching assistant. The professor did the lectures, and you led discussion in weekly seminar sessions for the same course.

Digging through some old files the other day, I found this little talk I gave to a group taking Dr. David Steinmetz’s CH13: Church History to the Reformation, on the day of their first seminar session. Dr. Steinmetz taught in the mode of “intellectual history”: opening up to his students some of the more important, and often difficult, theological discussions that engaged the great minds of the early church.

This talk of mine is intended to give students who didn’t necessarily have any background in historical or theological studies some strategies to get through the experience of the course, and to learn and grow along the way. Part of it is in “talking ’em off the ledge” mode, recognizing that the study of early Christian theology can look pretty arcane and intimidating. And part of it suggests some intellectual and practical strategies to get the most out of their studies.

If I had to do the talk today, I’d make some changes–and indeed I do cover some of these things in my courses now. But other things I had forgotten, and will be reviving in my courses. So here it is: a “little introduction to early Christian thought, for beginners”: END_OF_DOCUMENT_TOKEN_TO_BE_REPLACED

The black church and other American churches: “We’re not dead yet!”

Christian Century Jason Byassee’s got a good answer to Hauerwas and other doomsayers. See his blog entry about the continued viability of the black church, here. It explains why he thinks that “the church – mainline, black, and much farther afield still than either – probably has a bit more left in the tank than headline grabbers like to let on.” It also contains links to interesting reflections on the current state of the black church in America.

Stanley Hauerwas continues his long-time screed against the American church as “too American.” What do you think? Does he go too far here? Not far enough? What is the value and what are the dangers of such categorical critique?

Truth in advertising: (1) I certainly recognize the syndrome he describes; (2) I deny that the church in America has entirely lost its mission, selling its spiritual heritage for a mess of nationalist pottage; (3) I feel Hauerwas’s sweeping critique is excessive and counterproductive. It stands to discourage American Christians and deter us from participating in our churches more than it helps us to participate well.

Feel free to call me out on this. I’m always ready to learn and be corrected.