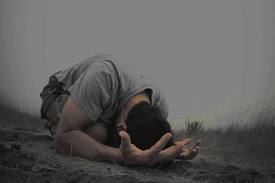 The last post looked at the “heart of late medieval heart religion”: devotion to the Passion of Christ. This post asks: How would getting a stronger sense of the humanity of Christ, today, affect the way we worship? This is almost the end of the “affective devotion” chapter of Getting Medieval with C S Lewis:

The desire for a tangible experience of God’s love has not dissipated with the discovery of the atom or the invention of the automobile. Modern Protestantism has given relatively little attention to our imaginative and emotional lives, yet the century just passed saw a dramatic upsurge of charismatic spirituality.

With its devotion to the person of Jesus, its impassioned worship, and its physical experiences of God’s intimate presence (tongues and “slaying in the Spirit”), this movement first sprung at the turn of the 20th century in a poor, multiethnic Los Angeles neighborhood, from a root in Wesleyanism’s continuation of the longstanding Christian “heart religion” tradition. Then at mid-century it reemerged in mainstream Christianity—springing first from the Anglican and Roman Catholic confessions, with their sacramental and historical emphases.

But you don’t have to be a charismatic to awaken your imagination and your senses in devotion to Christ. END_OF_DOCUMENT_TOKEN_TO_BE_REPLACED 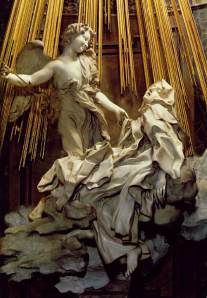 Margery’s book is earthy at points – even bawdy. She tells a particular story about an episode of sexual temptation in her life that is R-rated. And her language of intimacy with Christ is also direct and frank. When he sees a “comely [handsome] man” in the streets, it sets her to meditating on Jesus. And when she talks about her times of inner dialogue with her Lord, she uses a term usually reserved in her time for the kissing and cooing of young lovers: “dalliance.” We have not moved far from Bernard here! END_OF_DOCUMENT_TOKEN_TO_BE_REPLACED Richard Rolle’s spiritual  writings are striking for the earthy, empirical way he described the physical experience of passionate concourse with the Lord. In The Fire of Love, he describes actual bodily warmth he felt while in prayer. END_OF_DOCUMENT_TOKEN_TO_BE_REPLACED

Embodiment, emotion, death, asceticism . . . an attempt to describe the legacy of medieval faith A page from the Book of Kells

The book Medieval Wisdom for Modern Protestants, or as I think of it these days, Getting Medieval: A faithful tour of the Middle Ages with a little help from C S Lewis, is trying to be born, and I’m trying not to get in the way. I’m struggling to express an argument which will set up the medieval centrality of the Incarnation and Creation as that period’s most important legacy to us today.

What follows is just rough-draft wording of a short passage for the book’s introduction. Arguments and details still seem to pull in opposite directions, but I’m convinced of the truth, at least in outline, of what I’m struggling to express here.

Readers, I’d value your thoughts on this brief, rough, passage. Where can I go from here? How can I refine and add power to this argument? What am I missing? Where am I too negative about the modern church? Too positive about the medieval? Does this argument resonate at all with your experience or does it just seem to you to miss the mark?  END_OF_DOCUMENT_TOKEN_TO_BE_REPLACED

Anagrams of the Saints

A couple of years back, when I was in the thick of writing Patron Saints for Postmoderns, I started doodling with anagrams for my “saints'” names. This is what I came up with:

Margery Kempe = “Kerygma per me”

END_OF_DOCUMENT_TOKEN_TO_BE_REPLACED

Postcards from some patron saints

One of the reasons it took me five years to write Patron Saints for Postmoderns is the sheer volume of reading necessary to get a handle on the lives of ten complex people. It was worth it—and not just for the book: I discovered some bibliographic treasures along the way.

So, if you’re looking for some excellent historical reads, have I got a line-up for you! END_OF_DOCUMENT_TOKEN_TO_BE_REPLACED

God in flesh and bone: Medieval devotion to the embodied, incarnate, human Christ

For the complete story of the mill and brewery operator, mother of 14, and “lay mystic” Margery Kempe (1373 – 1438), see my Patron Saints for Postmoderns or the fascinating website “Mapping Margery Kempe.” Why should we care about Margery? Lots of reasons, but here are a couple that particularly struck me, excerpted from the chapter on Margery in Patron Saints:

God in Flesh and Bone

At the start of the chapter I made a connection between Margery and
Mel Gibson’s The Passion of the Christ. What was it about Gibson’s
movie that has galvanized so many modern (or if you like, postmodern)
Western Protestants? After all, of representations of Christ’s life there
has been no end. Why did this one, in particular, speak so deeply to so
many? I think there are two answers to this question, and that both of
them can help us understand and benefit from the life of this odd English
mystic, Margery Kempe. END_OF_DOCUMENT_TOKEN_TO_BE_REPLACED

Summary of chapter 7: Heart religion as a medieval tradition

Charles Williams was captivated by Dante Alighieri’s belief that he had been led to salvation by a young woman with whom he had become infatuated with when he was a boy. From Dante’s vision of Beatrice, Williams elaborated a “romantic theology.” Chesterton discovered a similar romantic dynamic in the life of “God’s troubadour,” Francis of Assisi. Lewis described his conversion as the surprising discovery of joy. Each of these writers was drawing on a distinctively medieval tradition of affective theology, exemplified especially in such late-medieval mystics as Julian of Norwich. END_OF_DOCUMENT_TOKEN_TO_BE_REPLACED