Another “mini-post” that wraps up my series from the draft of my forthcoming Medieval Wisdom: An Exploration with C S Lewis:

A renewed incarnational awareness will also give us a renewed and particular energy toward compassionate ministry, as it did for 12th-13th c. Christians in the “charitable revolution” of those centuries – and indeed in the whole long Christian growth and development of the hospital. But more broadly in all forms of compassionate ministry. Medieval Christians’ acute awareness of the Incarnation was no theologically fuzzy, inward-turned “mysticism.” Especially as they began to enter emotionally into the events of the Passion, that horrific demonstration of God sharing in our embodied suffering, the compassion for Jesus that this stirred in them became “enabled them to perceive Jesus in other humans and to act compassionately for their benefit.” The resulting works of mercy helped build a strong, humane center holding together medieval society. Surely we need something like this again.

We have seen how attention to the humanity of Christ and his presence in others’ humanity encouraged hospitality and pastoral and even medical care, in Benedict’s and the Benedictines’ emphasis on “Christ in the guest,” in the particularity of the seven corporal (and spiritual) acts of mercy, in the specificity and concreteness of Aquinas’s ethical thought, and of course in the history of the innovative Christian institution we now call the hospital.

The Enemy of our souls will do anything he can to raise our eyes from the physical needs of others in a false super-spirituality, keeping us from achieving that incarnational awareness that would pour out from our hearts in compassionate ministry. As Screwtape tells the junior demon,

“On the seemingly pious ground that ‘praise and communion with God is the true prayer’, humans can often be lured into direct disobedience to the Enemy who (in His usual flat, commonplace, uninteresting way) has definitely told them to pray for their daily bread and the recovery of their sick. You will, of course, conceal from him the fact that the prayer for daily bread, interpreted in a ‘spiritual sense’, is really just as crudely petitionary as it is in any other sense.”[1]

Passion, tradition, and discipline: Medieval monks had all the tools necessary for spiritual mastery

We wonder today why we are spiritually anemic. We (Protestants in particular) acknowledge that the Catholic legacy of spiritual teaching is a strong and useful one (at least, setting aside all that flagellation stuff, anyhow. That’s a joke. See the footnote in this post). In this post from the monasticism chapter of my forthcoming Medieval Wisdom: An Exploration with C S Lewis, I begin to look at where that strength and usefulness came from:

It may help us to answer the question “Why monasticism?” if we consider ascetic self-denial as one species of a larger phenomenon: the drive to achieve mastery in any human enterprise. How do you master any skill? First, you need to have passionate commitment to the goal of mastery. Second, you need to study and learn practical knowledge handed down in a tradition. Third, you need to practice discipline—both in the sense of dedicating hours and hours to repetitive practice, and in the sense of implementing an often extended list of discrete “disciplines”—the particular repeated actions required by the craft.

Think of the progress of a young girl toward becoming a skilled violinist. First comes the passion: one day she hears a piece of music, and it pierces her heart with pure joy. At the beginning, she just wants to hear it again and again; then, to know how to make those beautiful sounds herself. And so she begins years of lessons and practice, giving herself to those two complementary means to mastery: studying a tradition (here, of musical knowledge) and practicing an askesis—a training or discipline. END_OF_DOCUMENT_TOKEN_TO_BE_REPLACED

The last post looked at the “heart of late medieval heart religion”: devotion to the Passion of Christ. This post asks: How would getting a stronger sense of the humanity of Christ, today, affect the way we worship? This is almost the end of the “affective devotion” chapter of Getting Medieval with C S Lewis:

The desire for a tangible experience of God’s love has not dissipated with the discovery of the atom or the invention of the automobile. Modern Protestantism has given relatively little attention to our imaginative and emotional lives, yet the century just passed saw a dramatic upsurge of charismatic spirituality.

With its devotion to the person of Jesus, its impassioned worship, and its physical experiences of God’s intimate presence (tongues and “slaying in the Spirit”), this movement first sprung at the turn of the 20th century in a poor, multiethnic Los Angeles neighborhood, from a root in Wesleyanism’s continuation of the longstanding Christian “heart religion” tradition. Then at mid-century it reemerged in mainstream Christianity—springing first from the Anglican and Roman Catholic confessions, with their sacramental and historical emphases.

But you don’t have to be a charismatic to awaken your imagination and your senses in devotion to Christ. END_OF_DOCUMENT_TOKEN_TO_BE_REPLACED

The heart of medieval heart religion: Devotion to the Passion of Christ 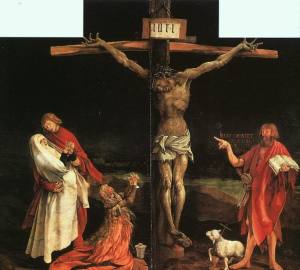 Now we get close to the crux of late medieval heart religion: devotion to the Passion of Christ. Draft of a piece of the “affective devotion” chapter of Getting Medieval with C S Lewis:

Perhaps the most intense and long-lasting dimension of medieval affective devotion was that era’s devotion to the Passion of Jesus, the God-man. Martin Luther, the founder of Protestantism and a thoroughly medieval man, acted on the repeated urgings of his Augustinian confessor, Staupitz, to “Look to the wounds of Jesus.” And soon after posting his 95 theses, he announced that the only man who deserved to be called a theologian was he “who comprehends the visible and manifest things of God seen through suffering and the Cross.” All through his life, his sermons and hymns contained striking images of that event. Where did this come from?

The roots of Luther’s passion devotion are to be found in the tradition of medieval affective piety that we have been examining: Anselm of Canterbury (d. 1109), asking Christ to forgive him “for not having kissed the place of the wounds where the nails pierced, for not having sprinkled with tears of joy the scars.” Abelard (d. 1142/43), focusing on the supreme example of Christ’s love and forgiveness in his Passion, in order to foster in the unbeliever emotions of horror and godly sorrow when confronted by this death. Bernard of Clairvaux’s (d. 1153) lavish attention to the emotions of the believer captivated by the love of God.

And then, of course, Francis of Assisi, whose all-consuming imitation of Christ seemed rewarded on September 17, 1224, in the hermitage on Mt. Alverno, when he is said to have received the gift of Christ’s wounds in his own flesh—the stigmata. END_OF_DOCUMENT_TOKEN_TO_BE_REPLACED