Even though we don’t expect Santa for another few weeks, December 6th is the day when we remember the original “Old St. Nick.” Nicholas was bishop of Myra in fourth-century Turkey. Little is known about his life except that he entrusted himself to Jesus at an early age and, when his parents died, gave all of their possessions to the poor. END_OF_DOCUMENT_TOKEN_TO_BE_REPLACED

January 3, 1863 cover of Harper’s Weekly, one of the first depictions of Santa Claus

John McGuckin is one of those wonderful creatures, an erudite historian who can also communicate history compellingly to a lay audience. I know because he wrote a great, colorful article for Christian History‘s issue on the Council of Nicea–my last issue as editor at that magazine.You can see a preview of his article here and buy the issue here.

The “powers that be” at Union Theological Seminary in New York chose Thursday, December 6, 2007 as the date of Dr. McGuckin’s installation as Nielsen Chair in Late Antique & Byzantine Christian History. That was all the excuse the good Dr. needed: since Dec. 6 is the Feast Day of St. Nicholas, he took St. Nick as his text.

The result was this enjoyable (and yes, compelling) talk. (That link seems broken, 12-6-14 – try this iTunes link: http://itunes.apple.com/us/podcast/john-mcguckins-inauguration/id85098839?i=32825222.) Skip the intro material and just jump ahead to 3:30. Here Dr. McGuckin begins to spin the tale of how Nicholas morphed into Santa Claus–jolly American consumerism and all–by way of Norse mythology!

Sinterklaas or Saint Nicholas, considered by many to be the original Santa Claus

Yup, there’s a traveling exhibit on St. Nicholas that’s been going around the country for the past few years, and now it’s here in St. Paul. MN.

The exhibit has actually been here since November 7 and will stay through December 26, 2010. It’s at the Landmark Center, 75 West 5th Street, St. Paul, Minnesota. For more information, see here.

The exhibit’s website tells us this about the original St. Nick:

The true story of Santa Claus begins with Nicholas, who was born during the third century in the village of Patara. At the time the area was Greek and is now on the southern coast of Turkey. His wealthy parents, who raised him to be a devout Christian, died in an epidemic while Nicholas was still young. Obeying Jesus’ words to “sell what you own and give the money to the poor,” Nicholas used his whole inheritance to assist the needy, the sick, and the suffering. He dedicated his life to serving God and was made Bishop of Myra while still a young man. Bishop Nicholas became known throughout the land for his generosity to the those in need, his love for children, and his concern for sailors and ships. END_OF_DOCUMENT_TOKEN_TO_BE_REPLACED 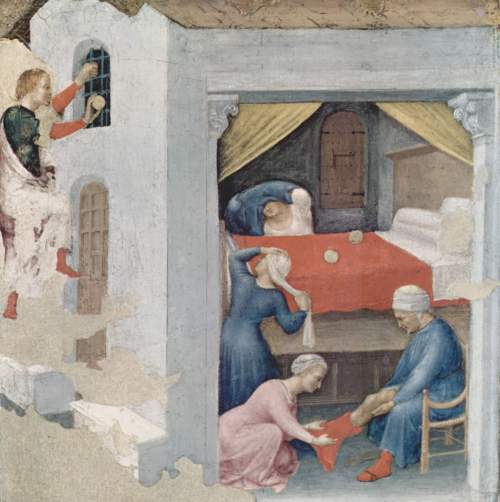 Saint Nicholas (Greek: Άγιος Νικόλαος, Aghios [“holy”] Nicolaos [“victory of the people”]) (270–6 December 346) is the canonical and most popular name for Nikolaos of Myra, a saint and Greek[3] Bishop of Myra (Demre, in Lycia, part of modern-day Turkey). Because of the many miracles attributed to his intercession, he is also known as Nikolaos the Wonderworker (Greek: Νικόλαος ο Θαυματουργός, Nikolaos o Thaumaturgos). He had a reputation for secret gift-giving, such as putting coins in the shoes of those who left them out for him, and thus became the model for Santa Claus, whose modern name comes from the Dutch Sinterklaas. In Britain he is known as ‘Father Christmas’. His reputation evolved among the faithful, as is common for early Christian saints.[4] In 1087, his relics were furtively translated to Bari, in southeastern Italy; for this reason, he is also known as Nikolaos of Bari.His feastday is December 6.

The most famous story about Nicholas is this one (pictured above):

A poor man had three daughters but could not afford a proper dowry for them. This meant that they would remain unmarried and probably, in absence of any other possible employment would have to become prostitutes. END_OF_DOCUMENT_TOKEN_TO_BE_REPLACED