Since I have mentioned D. H. Williams’s book Evangelicals and Tradition several times on this blog, I figure it’s time to provide a bit more information. Here is a reflection and review of the book by the late “internet monk,” Michael Spencer: 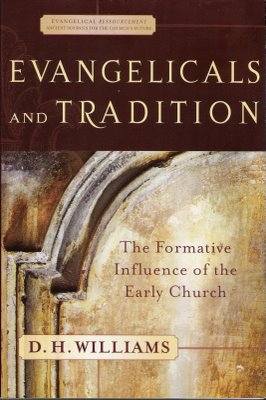 My list of must-read books for post-evangelicals is short. Newly added at the top of the list: Evangelicals and Tradition: The Formative Influence of the Early Church (Evangelical Ressourcement: Ancient Sources for the Church’s Future) by Baylor University professor of patristics and Baptist minister D. H. Williams (Ph.d, University of Toronto.).

Reviews of D.H. Williams’ work on the need for evangelicals and free churchers to recover the catholic tradition are everywhere on the web. (By both Roman Catholics and by leading Evangelicals.) Williams’ previous book, Retrieving the Tradition and Renewing Evangelicalism: A Primer for Suspicious Protestants, is universally acclaimed and I would predict similar accolades for his more recent work on the formative influence of the early church.

I have simply devoured Williams’ book. Seldom have I underlined and noted so much in one book. As a post-evangelical in spirit, I still have much to learn about the early church and the role of tradition. My own seminary training included absolutely zero specific courses on the first five centuries of Christian history, and no discussion at all of the place of tradition in regard to my own denominational heritage. So Williams has been both a revelation and a feast.

Williams knows what evangelicals (and some Roman Catholics) will be saying at his introduction and proclamation of the essential role of tradition and he is not shy about taking on those objections to build his own case. He demonstrates that tradition was essential for the vital work of the early church during its first centuries. He shows that this use of tradition is not hostile to any evangelical use of scripture, but the proper place of tradition will clarify the relationship of scripture in the development of creeds, baptismal language, catechisms, hymns, commentaries and works of theology.

He clarifies what is meant and not meant in sola scriptura, and corrects the misunderstandings common among both evangelicals and Roman Catholics. He takes a critical and helpful approach to the insistence and claims of evangelicals on specific theories of inerrancy. He shows how the reformers used tradition and how the later heirs of the reformers often bought into mythology in attempts to portray themselves as the recovery of the pure and ancient faith. Williams even takes on some of the current discussion of justification and imputation, showing how the early church fathers approached these subjects.

You can finish the review here on the iMonk site. You will note that one formerly evangelical reader of the review on that site credits Williams’s book (and the works of the late Robert Webber) with facilitating his own conversion to Roman Catholicism. Williams himself, in the book, disavows this result, claiming that conversion to Roman Catholicism is by no means a necessary response to engagement with tradition. Williams, a Baptist, has been touting Protestant re-engagement with tradition for several decades. He also taught for I believe two decades at the RC Loyola University–undoubtedly enjoying collegial relationships with his RC colleagues, yet not himself becoming Catholic. I heartily agree with Williams: “To read deeply in history is NOT [necessarily] to become Roman Catholic.”

This entry was posted in Resources for Radical Living and tagged D H Williams, evangelicalism, Tradition. Bookmark the permalink.