Christianity as healing religion: Gary Ferngren on the roles and rationales of healing in the early church 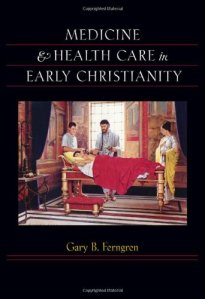 As I have done my early research on the history of medical care in the Christian west, I have benefitted greatly from (and blogged extensively on) the work of Guenther Risse and Darrel Amundson (if you chuck those names into the search box at the upper right of this blog, you can see a number of posts of material from those scholars).

But I have still been left with questions unanswered about the theological underpinnings of Christian medical care. Didn’t early/medieval understandings of human dignity, rooted in a scriptural insistence that we bear the “image of God,” join the Matthean sheep-and-goats passage to set the table for a Christian imperative that all should serve the sick, the dying, the poor? I was looking for a smoking gun on those things in the secondary literature.

Well, now I’ve found it. It’s the wonderful and relatively new (2009) book by an Amundson colleague and collaborator, Gary B. Ferngren. The book is called Medicine & Health Care in Early Christianity. Though it is not medieval in its scope, I have no doubt that the rich theological rationales for an “imperative of care” that Ferngen discovers in the early church continued to be influential if not determinative right through the early modern period and beyond. This early tradition of Christian health care is, like so much else in modern western Christianity, our forgotten heritage. I’d love to launch a mini-conference at Bethel University, whose nursing department is one of the best in the Midwest, using some of this material and talking about “the Christian imperative of care” or something like that.

In his chapter 4; “Christianity as a Religion of Healing,” Ferngren outlines in just what ways healing became important in the life of the early Christian church, making a careful distinction between miraculous healing and “ordinary” healing—and therefore between “healing religions” of pagan Rome such as the cult of Asclepius and the different ways Christians approached healing, of both of these types. A taste of that chapter:

64           “Since the time of Adolf Harnack (1851 – 1930) it has been widely maintained that an emphasis on physical healing was, from the New Testament era to the end of antiquity, a major aspect of early Christianity. One might cite many authorities for this view. I merely adduce two. First, Harnack: ‘Deliberately and consciously [Christianity] assumed the form of “the religion of salvation or healing,” or of “the medicine of soul and body,” and at the same time it recognized that one of its cardinal duties was to care assiduously for the sick in body.’ In a somewhat different vein Shirley Jackson Case writes: ‘In the ancient world it was almost universally believed that the function of religion was to heal disease, and it was in just this world that Christianity took its rise. It need not surprise, us, therefore, to find that Christianity is from the start a healing religion.’ That this view has gained something of the status of an orthodoxy is evidenced by a statement made by Vivian Nutton, who referred to Christianity as ‘a healing religion par excellence’ and suggested that ‘this was one of the features that secured for Christianity the primacy among competing religions.’”

If you are familiar with the work of Rodney Stark, who provided the single, prominent blurb on the back jacket of this Johns Hopkins U Press book, then you know Stark makes this same argument in his The Rise of Christianity: A Sociologist Reconsiders the Evidence. It was in Stark that I first encountered this idea of Christianity as a healing religion and healing as a determining factor in Christianity’s early spread.

Ferngren goes on to point out that “most scholars who have stressed the role of healing in early Christianity have emphasized . . . miraculous healing” over “physical healing through ordinary means.” He spends much of the rest of the chapter examining this claim. After examining the flourishing cult of saints and relics in the West and miracle-working holy men in the East, Ferngren says:

83-84     “The most persuasive argument against the thesis that Christians helped to create a mentality that was marked by the ubiquity of miracles and magic, in which they attracted proselytes by their success in miraculous healing, is that in spite of the appeal of magical charms and relics in the West in the late fourth century, as well as the popularity of ascetics in the Eastern Empire, there appears to have been no diminution in Christians’ seeking healing from physicians. While I shall reserve arguments in support of this assertion for a later chapter, it will suffice at this point merely to observe that the earliest hospitals began to be established by Christians in cities throughout the Eastern Empire at the same time that miraculous claims of healing were making their appeal—in the latter half of the fourth century—and that these hospitals were in some cases staffed by physicians and attendants. Even ascetics, as we shall see, were by no means averse to recommending the use of medicine when they believed it would be efficacious, though they were sparing in using it themselves. Miraculous healing did not replace for Christians their ordinary reliance on medicine.” [emphasis mine]

Ferngren admits that “a dramatic explosion of accounts of healing occurred in the late fourth century [after the legalization of Christianity under Constantine], as Christians increasingly sought miraculous cures” (85). He has a number of explanations for this, which I won’t go into here. But he again concludes:

85           “The new resort to miraculous forms of healing in late antiquity did not, however . . . lead to a decreasing reliance on medicine by Christians. Probably the majority of Christians continued to seek out physicians or employ home or traditional remedies, while the establishment of hospitals extended medical care to the indigent, particularly to the urban homeless who were previously without the means to obtain it. Christianity was never a religion of healing in the sense that Harnack described it, comparable to the great healing religions of Asclepius and Serapis. At no period was healing central to the early Christian message, and it always remained peripheral to a gospel that offered reconciliation to God and eternal salvation to sinners.”

So how did Christians organize healing, and why did they make healing a theological imperative on all Christians? For they did. Ferngren examines this in chapter 6, “Health care in the early church”:

113        “. . . [B]y the third century the rapid growth of Christianity in the cities of the Roman Empire led to the parochial [i.e. parish-based] organization of benevolent work on a large scale. The plague of Cyprian, which beset the empire in the mid-third century, greatly extended its philanthropic role, marking a considerable advance over the organization of medical charity that preceded it and preparing the way for permanent nonparochial medical institutions, especially hospitals, in the fourth century. But the creation of the hospital did not end the role of the urban churches in administering medical charity, which continued for several centuries.”

113-114               “From the very beginning Christianity displayed a marked philanthropic imperative that manifested itself in both personal and corporate concern for those in physical need. In contrast to the classical world, which had no religious impulse for charity that took the form of personal concern for those in distress, Christianity regarded charity as motivated by agape, a self-giving love of one’s fellow human beings that reflected the incarnational and redemptive love of God in Jesus Christ. At the same time that ordinary Christians were encouraged privately to visit the sick and aid the poor, the early church established some forms of organized assistance. . . .”

114        “Although their numbers and resources might be small, Christians were equipped, even in the most adverse circumstances, to undertake considerable charitable activity on behalf of those who were ill. Owing to a combination of inner motivation, self-discipline, and effective leadership, the local congregation created in the first two centuries of its existence an organization, unique in the classical world, that effectively and systematically cared for the sick.”

From this and other material in Ferngren, I draw a number of conclusions:

There is much more, and I am just beginning to read the book. I look forward to learning, and sharing, more of Ferngren’s work.

4 responses to “Christianity as healing religion: Gary Ferngren on the roles and rationales of healing in the early church”