5. Reason and imagination (or maybe better, “truth and beauty”

Because WordPress does not allow for the “read more” section divider (crucial for shortening the part of each post that shows up on this blog’s main page) to be placed in the midst of a numbered list, I’m simply going to say here: this is the last dyad of ideas that (in my opinion) Christian humanism often, in its history, attempted to bring together.

Actually, one more note too: After having proposed this Christian humanist “dyadic harmonization thesis” to our seminar development team, I started (the other day) reading the brilliant, clear, and well-researched account by Australian scholar Tracey Rowland of war-time and post-WW II German Christian humanism, Beyond Kant and Nietzsche: The Munich Defence of Christian Humanism. In that book, I’ve already discovered plenty of evidence of such dyadic harmonization in the German Roman Catholic thinkers whose Christian humanist thought Rowland so clearly and persuasively summarizes. In another post I may note a few of those spots in Rowland’s book. But for now, the list . . .

END_OF_DOCUMENT_TOKEN_TO_BE_REPLACED

Yes, Lewis really did think, in this post-Christian world, that it would be a step forward if we returned to at least some forms, some values, of Paganism. A Classicist by temper and training, he argued this in some writings with great seriousness, but in the following poem with a wink:

Cliche Came Out of its Cage

You said ‘The world is going back to Paganism’.
Oh bright Vision! I saw our dynasty in the bar of the House
Spill from their tumblers a libation to the Erinyes,
And Leavis with Lord Russell wreathed in flowers, heralded with flutes,
Leading white bulls to the cathedral of the solemn Muses
To pay where due the glory of their latest theorem.
Hestia’s fire in every flat, rekindled, burned before
The Lardergods. Unmarried daughters with obedient hands
Tended it By the hearth the white-armd venerable mother
Domum servabat, lanam faciebat. at the hour
Of sacrifice their brothers came, silent, corrected, grave
Before their elders; on their downy cheeks easily the blush
Arose (it is the mark of freemen’s children) as they trooped,
Gleaming with oil, demurely home from the palaestra or the dance.
Walk carefully, do not wake the envy of the happy gods,
Shun Hubris. The middle of the road, the middle sort of men,
Are best. Aidos surpasses gold. Reverence for the aged
Is wholesome as seasonable rain, and for a man to die
Defending the city in battle is a harmonious thing.
Thus with magistral hand the Puritan Sophrosune
Cooled and schooled and tempered our uneasy motions;
Heathendom came again, the circumspection and the holy fears …
You said it. Did you mean it? Oh inordinate liar, stop.

Or did you mean another kind of heathenry?
Think, then, that under heaven-roof the little disc of the earth,
Fortified Midgard, lies encircled by the ravening Worm.
Over its icy bastions faces of giant and troll
Look in, ready to invade it. The Wolf, admittedly, is bound;
But the bond will break, the Beast run free. The weary gods,
Scarred with old wounds the one-eyed Odin, Tyr who has lost a hand,
Will limp to their stations for the Last defence. Make it your hope
To be counted worthy on that day to stand beside them;
For the end of man is to partake of their defeat and die
His second, final death in good company. The stupid, strong
Unteachable monsters are certain to be victorious at last,
And every man of decent blood is on the losing side.
Take as your model the tall women with yellow hair in plaits
Who walked back into burning houses to die with men,
Or him who as the death spear entered into his vitals
Made critical comments on its workmanship and aim.
Are these the Pagans you spoke of? Know your betters and crouch, dogs;
You that have Vichy water in your veins and worship the event
Your goddess History (whom your fathers called the strumpet Fortune).

A new translation of “The Death of King Arthur” 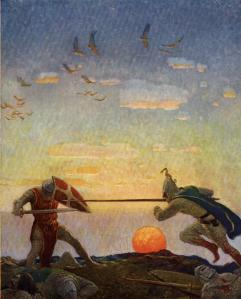 Here’s a ringing review and tasty samples of a new translation of “The Death of King Arthur,” done by Simon Armitage, from The Guardian [UK].

Hat tip to Alan Jacobs of Wheaton College for bringing this to my attention on his tumblr blog.

The review is here.

And here is a sample of this newly translated epic:

The startled glutton glared gruesomely,
grinned like a greyhound with grisly fangs
then groaned and glowered with a menacing grimace,
growling at the good King who greeted him angrily.
His mane and his fringe were filthily matted
and his face was framed in half a foot of foam.
His face and forehead were flecked all over
like the features of a frog, so freckled he seemed.
He was hook-beaked like a hawk, with a hoary beard,
and his eyes were overhung with hairy brows.
To whomever looked hard, as harsh as a hound-fish
was the hide of that hulk, from head to heel.
His ears were huge and a hideous sight,
His eyes were horrid, abhorrent and aflame,
His smile was all sneer, like a flat-mouthed flounder,
and like a bear his fore-teeth were fouled with rank flesh,
and his black, bushy beard grew down to his breast.
He was bulky as a sea-pig with a brawny body,
and each quivering lump of those loathsome lips
writhed and rolled with the wrath of a wolf’s head.
He was broad across the back, with the neck of a bull,
badger-breasted with the bristles of a boar,
had arms like oak boughs, wrinkled by age,
and the ugliest loins and limbs, believe me.
He shuffled his shanks, being shovel-footed,
and his knock-kneed legs were abnormally knuckled.
He was thick in the thigh and like an ogre at the hips,
and as gross as a grease-fed pig, a gruesome sight.
He who mindfully measured that monster’s dimension
from face to foot would have found it five fathoms.

Though my friend Colin Duriez’s book Tolkien and C. S. Lewis: The Gift of Friendship is no longer new, the interview I did with him when the book came out in 2003 is still fun to read. Whether you are a casual reader of these authors or an aficionado, Duriez’s books about them are packed with revelations. See especially his various Handbooks on Lewis, Tolkien, and the Inklings authors who met for conversation in Lewis’s Oxford rooms. They are filled with non-trivial details–“meaty,” I’d say–and interpretive insights that help to contextualize and explain the works of these beloved authors.

Our world would be poorer without two other worlds: Narnia and Middle-earth. Yet if two young professors had not met at an otherwise ordinary Oxford faculty meeting in 1926, those wondrous lands would still be unknown to us.

British author Colin Duriez, who wrote the article “Tollers and Jack“ in issue #78 of Christian History, explains why this is so in his forthcoming book Tolkien and C. S. Lewis: The Gift of Friendship (Hidden Spring). Duriez tells the story of how these two brilliant authors met, discovered their common love for mythical tales, and pledged to bring such stories into the mainstream of public reading taste. END_OF_DOCUMENT_TOKEN_TO_BE_REPLACED

J. R. R. Tolkien: the faith behind his writings

One of the first challenges I encountered in putting together an issue of Christian History & Biography on J R R Tolkien was justifying the topic. Tolkien? Wasn’t he a writer of secular fantasy stories? What did he have to do with Christian history? At the time the issue was being crafted, I reflected on this question in an online article:

Saint J. R. R. the Evangelist
Tolkien wanted his Lord of the Rings to echo the “Lord of Lords”—but do we have ears to hear?
Chris Armstrong

His family and friends called him by his second given name, Ronald, but his first name was John, in honor of his patron saint, John the Evangelist. And when J. R. R. Tolkien wrote The Books that have now spawned The Movies, his work was deeply colored by the convictions of his Roman Catholic faith. END_OF_DOCUMENT_TOKEN_TO_BE_REPLACED

J. R. R. Tolkien: He gave us back myth and with it, truth

One of my favorite issues to work on when I edited Christian History was issue 78 on J.R.R. Tolkien. Here’s my editor’s note from that one (I’ll also post the “Did You Know” column). I’m putting these posts in the “Medieval Wisdom for Modern Protestants” category because in writing that book, I’m using Tolkien, C S Lewis, and similar authors as guides into medieval faith.

From the Editor – He Gave Us Back Myth and with it, Truth
Chris Armstrong

By the 1960s, “miracle” had been co-opted to sell mayonnaise, “spirit” came from bottles or pep bands, and “Passion” referred only to the national obsession with sex. Into this materialistic, secularized decade came a wondrous visitor: J. R. R. Tolkien’s Lord of the Rings. END_OF_DOCUMENT_TOKEN_TO_BE_REPLACED